My impression is that the history of journalists and newspapers in colonial Australia, and particularly Melbourne, is largely untapped. I wish someone had tracked more closely the movements of Frank “Critchley” Parker (1862-1944), as his life intersects in some significant ways with the childhood of Katharine Susannah Prichard. This is Critchley Parker Sr I’m talking about, as in recent times there has been interest in his son and his curious death; I’ll return to that. END_OF_DOCUMENT_TOKEN_TO_BE_REPLACED 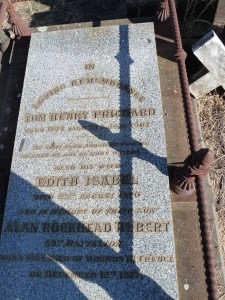 Tom Henry Prichard was Katharine’s dad, and he died in 1907. I go looking for his grave on a clear and mild April day. END_OF_DOCUMENT_TOKEN_TO_BE_REPLACED

It’s with some sadness I’ve finished reading Katharine Susannah Prichard’s final novel, Subtle Flame (1967). I still have to go back and read two earlier, obscure novels (Windlestraws and The Moon of Desire) in the rare book room of the library, but, chronologically, I’ve come to the end of the line in my long running reading project. END_OF_DOCUMENT_TOKEN_TO_BE_REPLACED

A trap for biographers is to think others will care about the details as much as they do. Don’t get me wrong – people really care when biographers are sloppy in their research and gets the details wrong. But I think of Alister McGrath’s 2013 biography of C. S. Lewis and how he devotes so very many pages to his great discovery that Lewis’s conversion to Christianity needs to be redated by a year from Lewis’s own account. The redating is somewhat significant, the conversion being a defining event of his life, and no doubt it affects some other things – but it doesn’t actually change the story of his life, which I think is what matters most to readers and even to our sense of history. To put it another way, I’m not sure most readers share McGrath’s sense of triumph, even if they’re glad he’s corrected the historical record.

I’m having many Alister McGrath moments in my Katharine Susannah research, redating and revising details of her childhood. I feel like such a clever detective as I edit my spreadsheet. But in the end, much of this will not even make it into the biography.

Several such moments today. Try to share my excitement, will you?

I’ve long been stumped by just when the Prichards left Fiji, and in my last post I said I wasn’t sure if it was 1888 or 1889 when they arrived in Melbourne. Yet it turns out there was a good reason they weren’t appearing in the shipping records for either of those years – Katharine Susannah arrived with her mother and two little brothers on 15 January 1887 as a three year old. She was in Melbourne not only for the great centennial exhibition of 1888, but also for Queen Victoria’s jubilee celebrations of 1887. She was so young she may not have had any memory of them later, but the spirit of those years must have affected her.

The movements of Katharine’s father, Thomas Henry, are curious. He stayed behind in Fiji for another eight months, before leading a delegation to Melbourne to urge the annexation of Fiji by Victoria. Leading such a delegation doesn’t seem the action of someone about to leave the colony, with his family already in Australia – yet it seems likely he resigned as editor of the Fiji Times (or was sacked) at about this same time, when the newspaper itself was moving from Levuka to Suva. There is no record of him returning to Fiji, and the next sighting of him is on a ship to Launceston, Tasmania in May 1888.

Here’s where a source I’d dismissed proved to be true. Because he was the deputy-editor of Launceston’s Daily Telegraph from 1893 to 1895, I assumed the Cyclopedia of Tasmania was simply wrong when it said he was the editor in 1888. But it was correct – he did spend a stint as editor at this time, possibly leaving due to ill-health, eventually taking up the position of editor of Melbourne’s The Sun around August 1889.

Two lessons for me – firstly, not to dismiss the piece of the puzzle which wasn’t fitting. It actually was a fact I wasn’t ready to accept. Secondly, the truth is rarely neat, and a challenge in narrating all this will be to sum up all these comings and goings in an engaging way. (If I was writing a novel, I would not be making such a messy series of events, with THP going back and forward so many times.)

For two and a half years, Katharine would not have seen her father much at all. It wouldn’t have been an unusual situation, but it must have been difficult, such a long time for a child, and she doesn’t mention it in her autobiography. It accounts for just how significant the big network of aunts and uncles are in her own account of her childhood. Getting the dates right – the details, if you will – has revealed something which wouldn’t be apparent otherwise. So details do matter, but more for how they change the story than for their own sake.

The other Thomas Prichard: letting go of co-incidences

I find a startling revelation about someone with my subject’s name. It’s the right time, it’s the right place, and it’s in line with certain things I know about the subject, but it’s shocking enough to entirely change the story of that person.

I’ve been researching Kattie’s father, Thomas Henry Prichard (1845-1907). He’s a fascinating figure, viewed next to his daughter – so very conservative, strongly opposed, for example, to a minimum wage, and a writer of modest talent compared to Kattie. He set out to make his fortune in Fiji around 1870, which was eventually where Kattie was born.

I was looking for something else about him when a “Thomas Prichard” suddenly came up in a brief discussion of the Daphne case in one book – he was the co-owner of an Australian ship which kidnapped one hundred islanders for the plantations of Fiji in 1869. The case was dismissed on a technicality, but led to new legislation specifically outlawing the practice. Was this how Prichard spent his youth? Was this one of the stories he avoided telling his daughter? It would make such a sensational story!

If it was true, which it wasn’t. The book in question led me back through so some dubious sources, the chain going back to a Pacific Island enthusiast’s website. All the best sources I could find, including contemporary newspaper reports, started it was William D. Pritchard, not a Thomas H. Prichard, who had been co-owner of that boat. Tom had nothing to do with it. It isn’t even particularly a co-incidence, although it is a sloppy mistake by the scholar.

But it still feels like it should have meaning. If it was a novel, finding out there was another character with the same name in such close proximity would mean much. Either a long lost relative in the 19th century, or a novel driven by the very randomness of the occurrence in the 1990s.

Perhaps one could write a new kind of history composed of co-incidences, near misses, and associations, a tangle of footnotes. I’m not sure what the point would be. It would really be a writer insisting, “this co-incidence is too amazing for me to have to admit it means nothing. I’m making it mean something by writing about it.”

I use this example, but it’s happening all the time, these plot developments that belong to a different story, a character not actually in my book, even if their namesake is. I have to let them go, all the co-incidences and near misses of history.

‘Should he continue in the wide field of literature he will assuredly become one of our first writers of romance,’ wrote Launceston’s Daily Telegraph, reviewing journalist Thomas Prichard’s novel, Retaliation: An Early Tale of Melbourne (1891). It was not to be. This is the only novel Prichard was to publish before his death by suicide in 1907; in addition to his journalism, the rest of his oeuvre is filled out with two known short stories in The Bulletin and two serial Christmas stories in newspapers, as well as poems and some works of non-fiction. Retaliation was published in a cheap paperback edition with a green cover and sold for a shilling. Trove, the combined catalogue of libraries across Australia, lists six copies held in Australia; there may be several more in libraries not listed, and a few in private hands, but essentially, Prichard’s novel and his literary career have been forgotten. Retaliation is a popular fiction of its day, and while competent and representative, is not especially memorable. It does, however, read as a fascinating document of its time, especially in relation to the work of Prichard’s famous daughter, Katharine Susannah. END_OF_DOCUMENT_TOKEN_TO_BE_REPLACED